With the wind at our backs and some good downhill sections we really picked up the pace. Heading towards the southern end of the lake and the turn north at Jönköping we were hitting our maximum speed of just over 60kmh several times. When we got to Jönköping we were forty minutes ahead of schedule but it was not to last.What had been a tailwind had turned into a headwind and a very strong one at that. We were also heading into several long uphill sections and the pace dropped considerably. Two major uphill sections of over 5km each were killing us. In fact, over the next 50km we lost all the time we had made up and were only just keeping up with our schedule.

Morale in the team sank a bit and it became very quiet. Nobody was chatting anymore, everyone was totally focused on just keeping going. To make things worse, the group got slightly separated from each other and some outsiders forced their way into our lines. This made it difficult to rotate the team and keep the guys at the front fresh. I was stuck right at the back and in the end I had to just sit there and watch everyone else suffer while I had it easy stuck out on the tail. One of the girls was also starting to feel sick. She couldn’t eat or drink without becoming nauseous and, of course, that just made things even worse. This really was our low point.

Luckily it wasn’t too far to Fagerhult. We got a rest some food into us. 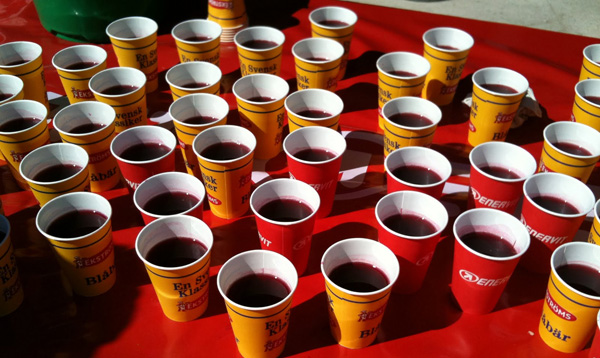 We also took the chance to reorganise the group. One guy stayed at the back making sure those who were struggling could keep up while those of us who still felt strong rotated at the front a lot faster to keep everyone feeling in top condition.

So far it had been a struggle but we’d had no mechanical issues. That was about to change.